How to be positive

This post was originally called : look for the silver linings or Pollyanna moments but I changed my mind. As I was driving to work this morning, I was thinking about what to write my next post about.  I was singing along to a song on the radio, when I thought how much I actually enjoy my commute to work.  Well that probably sounds a bit weird considering I just have to drive about six or so miles, but getting stuck in traffic – which I usually do – means I spend about three quarters of an hour listening to ‘Heart Breakfast with Jamie and Emma,’ getting to listen to some brilliant songs and being able to sing along to my hearts content!  My windows are firmly shut and I figure I’m unlikely to see anyone I know so I’m well away! This really sets me up for the morning and makes a drive, which would otherwise be boring and tiresome into quite a relaxing, entertaining experience!  As I’m quite often only doing a couple of miles an hour I’ll often also look around and notice the scenery, especially during a couple of  parts of the journey, when I am quite high up and can see for miles. Don’t get me wrong, I’m not in the beautiful Lake District or the Highlands of Scotland, I’m just in leafy Surrey, but even so…

You’re probably still wondering about the point of this rambling, although there is a bit of a clue in the title, what I’m trying to demonstrate is that it is beneficial to look for something good, in what would otherwise be something bad.  I’m talking about that well known saying: every cloud has a silver lining, or thinking about ‘Pollyanna’ moments.

I really love the film Pollyanna.  If you’re not familiar with it, it’s about a cheerful, positive orphan who is sent to live with her rich aunt,  she is desperate for her aunt to show her some love and affection. Polyanna is always optimistic and sees the good in everyone she meets and everything she sees.  Because of her chirpy demeanour, she makes friends with quite a few unexpected people and everybody is happy to be around her.  She cheers others up and talks about the Glad Game that her father taught her.  This is a game where they have to try and think of something to be glad about, even when the situation wouldn’t normally encourage positive feelings. One example she gives is when she wanted a second hand doll and she was sent a pair of crutches by the people of the village instead. She said she was glad because she didn’t need to use them.  The maids at her rich aunt’s house were all complaining and saying they hated Sundays so Pollyanna told them they should all be glad because it is six whole days until the next Sunday!  The film is based on a book, written in 1913, by American author, Eleanor H Porter – I bet she was a lovely lady to have written such a feel-good book.  I haven’t actually read it myself but I think I’d like to,  judging by the film.

Note: I’ve just deleted a whole load of text because I went on to say what happened  in the rest of the film, but then I had a thought – if you haven’t seen the film, then I would have completely spoilt it for you, so I shall leave it there!

I have been thinking about other occasions when it is possible to think of reasons to be glad, when you might not necessarily.  One is when it rains – we all hate being caught in the rain don’t we?  However, positive things are (the obvious) it’s good for the garden, but also – you can wear your new raincoat or try out your flashy new umbrella!  If you have a fall, yes it might hurt you and cause you problems, but, chances are, it could have been a whole lot worse.  If you are at work and it’s boring and monotonous, feel glad that you actually have a job. There are many people who would be truly grateful to have the job that you are doing.  You might be carrying shopping around in bags that are really cutting into your hands, but – yes you guessed it – be thankful that you have the money to go shopping in the first place. There are many, many more examples, can you think of any? 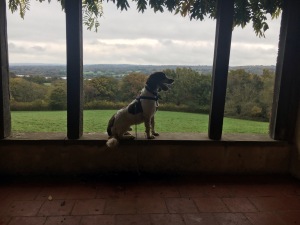 In the autumn we took our lovely springer spaniel to a National Trust house and garden.  It was a miserable day – as you can see from the photo – but we walked for miles and Duke had a wonderful time.  He loves nothing more than a run through the woods and couldn’t care less if the sky is blue or grey! He also isn’t too fussed about a bit of rain.  We made the most of our day out and  enjoyed the walk around the gardens and the glorious views. I’m not normally a person who would particularly choose to go for a walk when it’s raining but, despite the weather, we had a fantastic day, created memories, gathered ideas for the garden, got exercise and made the most of our time off work.

I don’t walk round wearing rose-tinted glasses, I know there are lots of bad things that happen in the world. I know that some people  have to live in dreadful conditions and some live through harrowing, traumatic times.  BUT thankfully most of us don’t, so I just think we should try and look on the bright side when we can and have a positive outlook where possible.  Let us try and join those whose glass is half full, not half empty!

This site uses Akismet to reduce spam. Learn how your comment data is processed.

Who loves seeing the first blossom on the trees 🌸 Even though it’s quite cold 🥶 it’s another happy sign that we are a step closer to spring and warmer weather ☀️
If trees could talk I bet they would have a thousand tales to tell!
No off-lead walks or running around for this lovely boy for two weeks, we took him to the vet today as he keeps limping and he’s hurt his elbow joint, poor thing, so he’s on anti inflammatory tablets and lead walks for two weeks. hopefully this will sort it 🙏 Springers are prone to joint injuries as they run fast and ours like nothing better than a run around when we are out. I guess seven and a half years of running takes it’s toll. Hopefully they’ll be happy with gentle walks for a while 🐶
I was so pleased to discover a walk the other day where I barely saw another soul. It was so peaceful that I visited it again with a lovely friend yesterday too 😊 It makes me feel a little stressed sometimes when I am in places, even outdoor spaces, and there are lots of other people around too, especially when they are in large groups and just walk at you. It feels like some people have just had enough of lockdown and don’t care any more which is sad. Anyhow for now I’m going to try and stick to quiet peaceful places that hopefully not many other people know about!! How are you managing to avoid seeing too many people while out and about or are you fine with it?
#transformationtuesday 💚 It’s been a labour of love and finally the kitchen is finished!! The walls were painted first, followed by the cupboards and drawers, new handles put on and then finally the tiles. It’s really brightened a dull room and I’m pretty chuffed with the results 💚 I’d just like to add a print to the wall and get a soap dispenser (it’s the little things!) what else do you think I could change?
Oops this poor girl took a tumble today but she still managed to stay composed and keep hold of her handbag and flower!! Guess who was a bit clumsy while cutting the grass 🤦‍♀️ It was really lovely to get out in the garden and get some jobs done today but now I need to try and patch her up with some superglue... Have you managed to get outside at all today? It’s been beautiful here ☀️

Advertisement – This eco-friendly paint is lovely!

Loving life in a village in the English countryside. Surrounded by trees and fields, dogs, an elderly calico cat and chickens. Random rambles, photos and a chitchat of country life... My site may contain affiliate links which means I may earn a small commission if you click on a link and make a purchase. As an Amazon associate I earn from qualifying purchases.